A thoughtful reader of my books recently brought to my attention a wheel of fortune application called wheel decide. Available here:

Appropriately, I’ve renamed it ‘Wheel of Misfortune’. One simply clicks on the ‘Make/Modify Wheel’ tab to change the choices displayed on the wheel.

This is a really fun way to decide number strokes and what implement to employ when administering punishment. I tried it yesterday. With Robert secured over the whipping bench, bare bottom perfectly presented for punishment, I set up the wheel with numerous low number thrashings, such as two strokes cane, three strokes hellstrap, that sort of thing, then I spun the wheel and administered the punishment as indicated by the wheel, in this case just two strokes with my hellstrap. I made sure they were hard and spiteful, so even two strokes had him gasping. After a few spins I started adding high numbers to the selection on the wheel after each spin. I decided that the game would conclude when a high (double digit) number turned up and had been successfully administered with my new senior dragon cane. The high number that the wheel eventually turned up was twenty-four. Robert had already endured some quite severe strokes of the hellstrap and cane and looked quite sore, so I decided to treat him to a break before I administered his finale.

“I’m going to take a coffee break, Robert,” I informed him, “At the library. I have some books to return.”

“You can’t leave me here like this!” he protested.

“I can do whatever I please, Robert” I replied, picking up the hellstrap, “And you know very well that I will not tolerate instruction from you when you are being punished.”

I administered a dozen extremely spiteful strokes all aimed to curl into his inner thigh. His shrieking and desperate apologies fell on deaf ears. Will he never learn? (I hope not).

With that, I left him alone in the house, with his bare bottom thrust up, waiting for the dragon cane on my return.

Our local library has a coffee lounge, so when I had returned the books and taken out another few, I sat down with a coffee. I love to ‘people watch’. How many of the people I was observing, I wondered, had cane marks on their bottoms? How many would administer a spanking before the week was over? Had any of the people here read any of my books?After all, I’ve sold many thousands. How many would guess that I had my partner secured over a whipping bench at home, naked, waiting to be caned?

I must confess that I also did have some negative thoughts. What would happen to Robert if I had an accident? What would happen if we had a burglary? What would the burglar do when he came face to face with Robert’s striped bare bottom? (Robert later told me that he had had similar thoughts). On reflection, leaving Robert alone in the house, secured over the whipping bench was probably unwise. But it was deliciously exciting to know he was absolutely helpless and at my mercy with his bare bottom presented perfectly for punishment, so I ordered another coffee, this time with cheesecake.

There had been no burglary when I returned home an hour later. Robert’s expectant bare bottom was exactly where I had left it. I wasted no time in picking up the dragon cane.

“In silence,” I ordered as I took my position and measured the senior dragon cane across his trembling, gaping bottom cheeks.

It was, of course, impossible for him to take the vigorous caning that followed in silence, so he earned himself an extra six penalty strokes. I do love the intoxicating sound of a cane biting hard and deep into the flesh of a bare bottom, and to watch the reaction of a recipient as he desperately writhes and struggles hopelessly with his restraints, bottom cheeks bizarrely clenching and unclenching, failing totally to cope with the lines of white hot agony that sear across his helpless bottom. Bliss!

Unfortunately, there is a price to pay for the delights of administering such severe canings. Robert ‘s bottom is so vividly wealed that he will be unfit for punishment for at least three weeks. I’m not sure I will be able to last that long. It’s such a long time since I had a ‘blank canvass’ to work on. My hunger for administering excruciating bare bottom thrashings never ceases to amaze me. 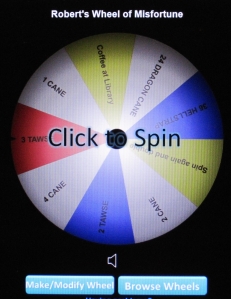 6 Responses to WHEEL OF MISFORTUNE

This site uses Akismet to reduce spam. Learn how your comment data is processed.